There are many laws to abide by when you’re driving a vehicle, those laws can adjust and change as you move from B-roads, to A-roads and onto motorways. I’m sure we all try our best not go against any of these laws but a lot of people may not even realise they are braking laws they didn’t know existed!

Driving can sometimes be irritating, especially when you have a slow driver in-front of you or somebody in the on-coming traffic is cruising along with their full-beam headlights on. But be wary that this kind of behaviour can and will earn you a fine if not points on your license.

Here are a few examples of driving laws you may not be aware of:

Slow Driving
Police may pull over slow drivers to have a quick word as it can cause both irritation and confusion among other drivers. Irate drivers are much more susceptible to taking rash actions, therefore increasing the chance of an accident.

Consequence: From a verbal warning all the way up to 9 penalty points – depending on circumstances.

Failing to Remove Snow
Failing to clear your car roof from snow can be incredibly dangerous to both others and yourself. After driving and braking on and off the snow could easily slip down into your vision and block your sight all together.

Due Care
Many tasks come under this term, such as eating, drinking, applying make-up, changing CD, using in-car infotainment system or re-filling that e-cig. While not all these actions are illegal per-se, driving without due care is, so too much focus on any task except driving whilst in control of a vehicle is definitely illegal.

Consequence: Between 3 and 9 penalty points and possibly a £100 fine.

Single Yellow Parking
While we all know parking on a single yellow line isn’t illegal, leaving your car whilst there is. Single yellow lines are not for parking or ‘nipping into the shops’. If you’re parked on single yellows, then the second you leave your car you are liable for lawful punishment.

Unfixed Phone SatNav
It’s so cheap to pick up a dashboard phone stand these days nobody can have an excuse to not be using one. They’re cheap, convenient and safe. So many drivers are resting their phones on their laps and using them as a SatNav, constantly removing their eyes from the road and their surroundings. If you’re mobile phone isn’t fixed into position, then using it with or without SatNav is completely illegal.

Consequence: A straight £200 fine and up to 6 penalty points on your license.

Splashing Pedestrians with Puddles
Other than making you very annoying and loathsome this can actually get you into trouble with the law, causing you to fork out potentially large sums! Driving without reasonable consideration for other persons’ is considered a crime.

Consequence: Possible 3 penalty points, plus a fine ranging between £100-£5000 – depending on whether your case goes to court or not. 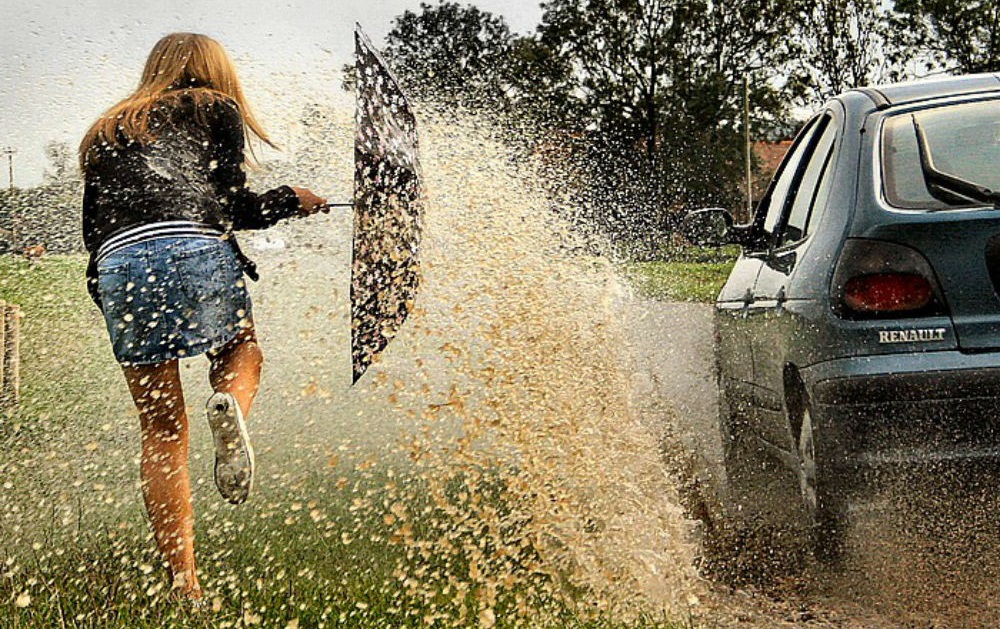 Paying at the Drive-Thru
This one may catch a lot of people out, it may also seem tedious but it’s in place for a reason. When paying for your order with a smart-phone at drive-thru’s, you want to make sure your hand-brake is on and the engine off, otherwise you risk being punished for using your phone whilst driving.
Consequences: 6 penalty points and £200 fine – that’s an expensive burger!

Speed-Cam Headlight Warnings
Many drivers warn their fellow drivers of on-coming police speed cameras by flashing their headlights. This act of vigilance is very much frowned upon by the law, classing it as ‘a dangerous practice’. Drivers flash their lights to give-way, catch other driver’s attention and many other ways in which they were not designed for, all of which can be seriously dangerous – blinding, confusing and distracting anybody within range.

Consequence: A fine with a minimum of £30.

There are many laws and rules to follow when it comes to vehicles and road use. Be sure to keep up-to-date with the latest on the DVLA approved number plate laws by visiting our Guide to DVLA Approved Plates – filled with laws on styles, designs, regulations and more.